We make cinematic, experimental "rock" for music nerds, horror fans, film lovers, followers of science fiction and fact, comics, cartoons & humor and anyone with a complicated relationship with heavy metal and classical music.  Do you like Primus, Tchaikovsky, Frank Zappa, Steve Martin, Louis Armstrong, Danny Elfman, Ween, Monty Python and Mr. Bungle?  We do, too, and our revolving door of players keeps us sounding and looking different from project to project.

In fall 2022, we'll embark on a two-month Nosferatu Centennial Tour all over the US and Canada in conjunction with the release of our updated soundtrack!

PATREON - new content twice a week. Most is free.  Contribute if you'd like to help keep us going!

We started making weird rock music at clubs in 2003 but our wide scope of styles, cinematic flare and and mix of modern and classical instruments led to bigger projects in the arts realm:

We've composed 9 tastefully modern soundtracks for silent films and performed live with the movies all over the US and Canada. We create custom artwork, incorporate audience participation into our shows. The Alamo Drafthouse called us one of the best silent film orchestras in the nation and many arthouse cinemas and film festivals have echoed that.  Aw, shucks!

Our whimsical re-imagining of The Nutcracker Suite became a holiday tradition when we debuted it in 2004. We added wacky versions of holiday numbers over the years and played all over our region. In recent years we've become the band at Panoramic Voices' annual Holiday Mixtape. 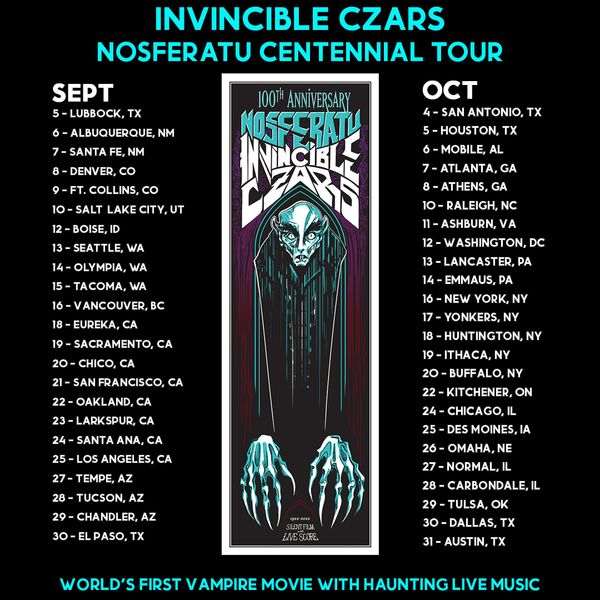 Get them here.  If you're in LA, SF, Austin, Chicago, Denver, Raleigh, NYC - get tickets now!  These will sell out or get close. Best seats go first. 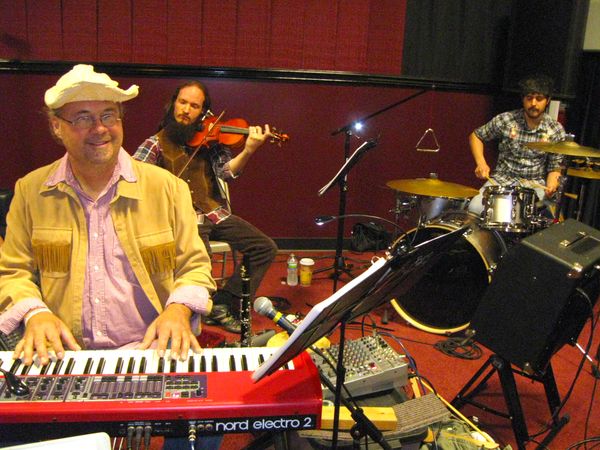 Our 2012 album "Martyrs of the Alamo" is now on Spotify, Apple Music and more.

10 years ago, we ventured outside our home state of Texas with a silent film for the first time.  The movie we happened to… 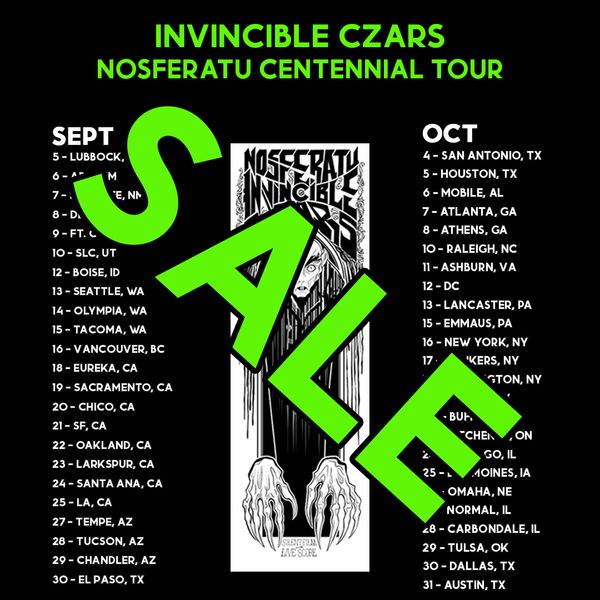 We're trying to raise an additional $2500 this summer to offset inflation and additional costs on our Nosferatu Centennial Tour.  To start, We've put everything on our site on sale with an option to simply donate the amount of your…

Our most popular artwork on a good ol' black t-shirt with the pre-2019 designation of "men's" cut.

See Size chart. The Count is always with you when you wear this shirt.

Get all four of our screen-printed posters for just $40!

Any combination of 3 posters. Please Indicate which 3. Example - "I want 1 Nosferatu and 2 Caligaris."

Any posters. Please Indicate which two you'd like in the comments. Example - "I want 2 Caligaris," or "I want 1 Nosferatu and 1 Jekyll."

Bookmark-size stickers, one of each poster design (Nosferatu, Dr Jekyll & Mr Hyde, Phantom of the Opera, Cabinet of Dr Caligari) plus a Czars bird head logo sticker. Or any combination of the 5, specify if you wish!

Our fourth silent film poster by Leah Lovise. Angular, dreamy with six sets of eyes if you include the spectacles. Screen-Printed!

MP4 with our soundtrack!

What does "women's" even mean anymore? If you're curvy and like a cropped sleeve, this is the shirt for you. Two-sided design. Just know that these run smaller than the cut once known as "men's."

PHANTOM OF THE OPERA COLLECTION

Phantom of the Opera Poster BACK IN STOCK!

This one has a skull on it. A skull! You know you want it. Third in our series of silent film posters by Leah Lovise.

Phantom of the Opera T-Shirt (Unisex)

We added some color on this one. Olive green/grey with Leah Lovise's art in burgandy.

Our scariest poster and Josh's favorite.

This is a red shirt with our Jekyll & Hyde art on it. If you buy it, you can wear it whenever you want and other lifeforms will see it. Do it.

This shirt is red. If you like red, and you like curvy shirts, this is the one. We only have a few left. Get it.

Our rendition of Tchaikovsky's most bombastic piece! (Fireworks not included.) Also pieces by Ravel, Sousa, and us!

Our logo on the best color - purple! Only a few left.

We've put everything on our site on sale to raise money for our Nosferatu Centennial Tour. We were already looking at some unexpectedly high inflation, increased fuel and food expenses and need for a lot of masks and Covid tests. Thank you for pitching in to help keep the show on the road --- literally!

Only two left. This screen-printed poster was for a show on our 2005 Gods of Convenience tour that was so poorly attended we didn't even play. Even weirder, the venue went to the trouble of having these made and didn't put them up until the day of the show. It's a lovely memento of a not so amazing summer night in 2005 near Cincinnati, OH.

Only 2 left. Screen-printed. We played our score for "The Unknown" as the movie was projected onto a wall in the second most wide-open, cacophonous room we've ever played. Chatter from attendees was louder than us. It was one of our highest paying gigs at the time. We also got a bunch of free dinosaur masks!

Choose white or "natural". Each one is screen-printed, signed and numbered by the artist. She contacted us only a few weeks before this show offering to make posters for it but we'd already chosen Hans Rickheit's alien face art for this show poster. That didn't stop her. She made this art and dropped off the posters at Josh's house. We never met

Choose white or "natural". Each one is screen-printed, signed and numbered by the artist. She contacted us only a few weeks before this show offering to make posters for it but we'd already chosen Hans Rickheit's alien face art for this show poster. That didn't stop her. She made this art and dropped off the posters at Josh's house. We never met her. Only a few left of each color.

Only 4 left. These were from our first and last performance at the Athenaeum in Chicago. They held a blood drive which was a GREAT idea. Unfortunately, they also had a dreadfully boring silent film expert speak before we played and he put everyone to sleep. Rock on, Chicago!

This was our first holiday show with Panoramic Voices before they'd changed their name from Texas Choral Consort. Just two left on shiny, thick paper.

These are the posters we hung up all over Austin for our very first show at the Alamo Ritz in 2010. It sold out and we did the show again for SxSW film a couple weeks later. 15 left.